an average girl working at your not so average job

You can bring me flowers when I’m dead and gone.

One of my favorite artists is Ray Lamontagne. You probably know him. He sings that one song, “Trouble”, and I mean just YouTube it. Ten bucks says you’ve heard it before.

Sit and cry
And say goodbye
And sing this sad, sad song
You can bring me flowers, baby
When I’m dead and gone

I love it. Oh my goodness I love it so much! You see, I do a lot of arrangements in my job. I do pre-arrangements (before the person passes away) and I do final arrangements (or at-need arrangements, when the person has died). And I often bring up the idea of flowers. Now, sometimes the conversation goes like this:

Me – “Now, have you given any thought about flowers?”

Arranger – “Oh, yes! Mom loves flowers! We want as many flowers as people will send!”

But more often than not the conversation will go like this:

Me – “Have you given any thought about flowers?”

Arranger – “What’s the point in flowers? We’re only having a one day visitation and flowers are so expensive…”

Now, a little fact about me. I don’t have a green thumb. I have a black thumb. If you give me a flower I will kill it. (and give it an awesome funeral, *snare, snare, cymbal* it’s a joke…..get it….) But I LOVE flowers. My fiancé will give me flowers for no reason whatsoever and I become the happiest girl. And I’ve heard it all before. When I’m making pre-arrangements with people there are the excuses. Flowers are expensive. I’d rather enjoy flowers when I’m living rather than in my death. Blah, blah, blah. And guess what. YOU DO HAVE A POINT. But I am here today to defend the funeral flowers.

Now, back in the day flowers were used for a few different purposes for the funeral. One of them being that the beautiful smells would mask the sometimes ‘not’ so beautiful smells of the deceased. And thanks to advances in embalming and preservation, today we *hopefully* don’t experience those not so nice smells anymore.

But I’ve seen the look on grieving people’s faces when they walk into the visitation room for the first time to see their loved one. The beautiful colors captivate their eyes. The wonderful smells fill their noses. And the softness of the petals beautifully surround their deceased. Flowers make people smile. As a widow runs her fingers along the red roses she also reads the sympathy card that accompanied them. And her heart hurts just a little less in that moment.

Now, I have some suggestions. Because yes, flowers can be expensive. Especially the typical ‘funeral flower’. (Please note that I’m not including the casket spray in the ‘funeral flower’ group. The casket spray sits on top of the casket. It’s the piece of honor that the next of kin normally gives. Send the casket spray.) You know what I mean. They are the big arrangements that often get tossed at the cemetery or left at the Church. The flowers that remind you of the funeral because of their size. And honestly where would you put them? They look like this:

If I were to send flowers to someone grieving, I would send them something that they could enjoy after the funeral. Something that they could place on their dining room table, or in their living room. There are so many options! A beautiful vase, dish garden, or green plant. (I’ve seen families fight over who gets to take the dish garden home.) Flowers that are just as beautiful as the one above, but are a little more practical. And the thing about these flowers are that they work for both traditional funeral and cremation services. Here are just some ideas: 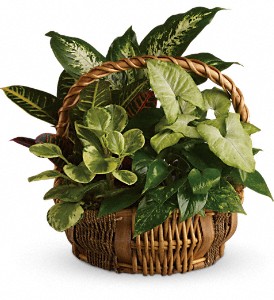 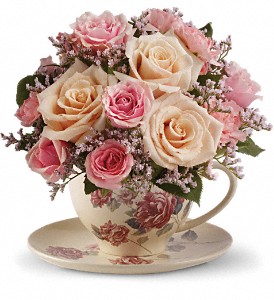 So yes, you can send me flowers now. Please do! But also, please send me flowers when I’m dead and gone. Because when I’m dead, they won’t just be for me. They’ll also be for those I’ve left behind. And sometimes, a little rose is enough to remind someone in the darkness that there is still light.

6 Comments to “You can bring me flowers when I’m dead and gone.”